This is our upcoming opera for this term in the Silk Street Theatre. With music written by Francis Poulenc, Martin Lloyd-Evans will be directing and Dominic Wheeler conducting. Set and costume design is being undertaken by takis and Robbie Butler will be the lighting designer.

The production is well into rehearsals and the fit up has begun on the Silk Street stage. As part of their first year studies, Group B have joined the production as crew and are working on the fit up. They’ve been doing yoga as a warm up before joining the fit up and learning new skills while helping out. 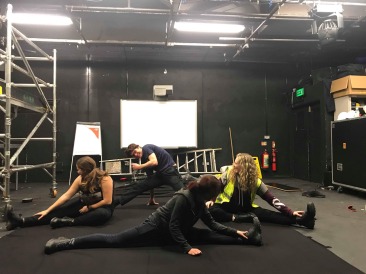 The opera is set in the French Revolution and follows the story of Blanche de la Force, who has joined the Carmelite convent. The piece is based on a true story and is rumoured to be very dramatic – looking forward to seeing it!

The SM team have also been busy, the props spread took place yesterday. Some photos can be seen below. The Stage Manager is Yool Lee, DSM is Anna Zentala and Chloe Siller and Juliet Hague are ASM’s.